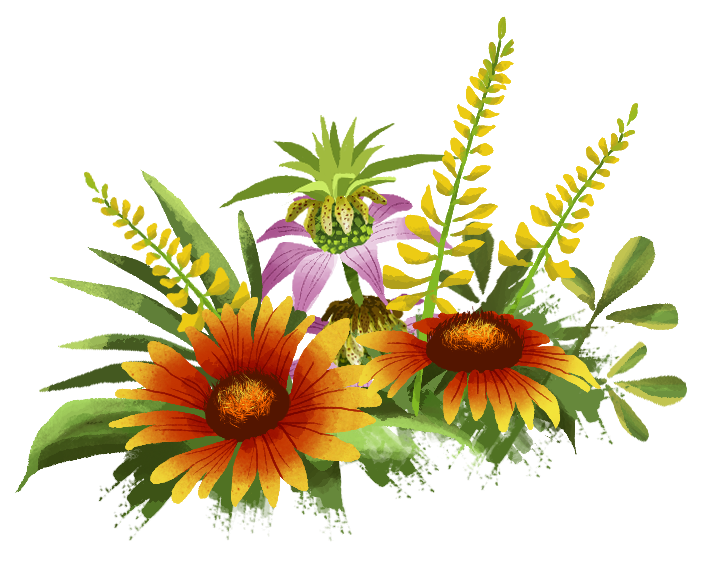 The Honey: Walker's Multi-Floral Wildflower Honey is a proprietary blend with a medium body and smooth finish. It is always raw, never pasteurized and never DE filtered. We want to keep honey in its truest form to honor our philosophy of "Bee to Bottle".

The Plants: There are a multitude of wildflowers across the United States that provide nectar for bees. We select the regions with the best tasting honey plants. Our favorites include wildflowers from the Daisy Family, the Mint Family, and the Clover Family.

The Provenance: United States. We work to select the best tasting wildflower nectar sources from across the US for our proprietary wildflower.

The Honey: Clover Honey is the most widely produced honey in the United States. This popularity is due to its abundance and overall appealing flavor. Unlike most honey that is labeled “Clover”, Walker’s Clover Honey is not a blend of clover and other honeys. If you have never experienced pure Clover Honey, we invite you to try a sample or a jar. Some people describe pure Clover Honey as “smooth” or even “buttery”.

The Plant: Clover Honey is primarily produced from what is commonly called "sweetclover" which is an umbrella used to refer to the separate species of white clover and yellow clover. This plant was integrated from Central Asia centuries ago and now grows wild on our country's plains. Many farmers and ranchers also use clover to rebuild poor soil. As a nitrogen-fixing legume (pea family), clover is a natural soil builder and an excellent forage and hay plant.

The Honey: This varietal tastes and smells like an orange grove in full bloom. Orange Honey is good straight from the spoon and is the perfect complement to hot tea. It is an excellent topping for fresh fruit salad—just slice your favorite seasonal fruit, drizzle on Walker’s Orange Blossom Honey and enjoy!

The Plant: Our Orange Blossom Honey is produced from the nectar of the same blooms that yield the succulent oranges that you enjoy throughout the year. Wherever oranges are grown and produced, there are beekeepers taking advantage of this March blooming cultivated citrus plant. Orange Blossom Honey is produced across the Southern U.S. in the citrus groves of California, Texas, Mexico and Florida.

The Provenance: From 1942 to 1992 Walker Honey Farm produced Orange Honey in the Citrus Groves of the Lower Rio Grande Valley of Texas. Since then we have shopped for the best Orange Honey to deliver to our customers. Utilizing beekeepers we know in California, Florida, Texas, Brazil and Mexico we are committed to using our 50 years of Walker family experience producing Orange Honey to bring you the best of this sub-tropical specialty honey. Inquire about our current supply as this varies year-to-year as we buy only the best offerings each season.

The Honey: Yaupon Holly Honey is less sweet than most honeys. It has a slight bitterness which balances the natural sweetness of honey. A medium to full-bodied honey.

The Plant: Our bees gather nectar from the Yaupon Holly (Ilex vomitoria) that grows in the understory of the Post Oak Savannah region of Central and East Texas. Yaupon trees bloom from late March to mid April. For many centuries, native Texans have made a dark, caffeine-rich drink from the dried leaves of Yaupon Holly, prompting the exploring Spanish to name the tree "Chocolate del Indio".

The Honey: Buckwheat Honey has a robust, full-bodied flavor and is dark amber in color. This honey is made by the gathered nectar from the small white flowers on the Buckwheat grain. Buckwheat Honey is higher in antioxidants than some other honeys and has been used for centuries to help soothe a sore throat or a cough.

The Plants: Buckwheat Honey comes from the Buckwheat plant, which despite its name, is not actually related to wheat. When in bloom it appears as a small shrub with a white flower.

The Honey: Tallow Tree Honey has a slight bitterness with notes of cinnamon and vanilla accenting its sweetness.  Tallow Tree honey is often a higher moisture honey as it is from a coastal region, with high humidity.

The Plant: On the coastal prairie along the Texas Gulf Coast grows a tree that was introduced into the Houston area in the 1950s as an ornamental landscaping tree. The Chinese Tallow Tree (Triadica sebifera) has a beautiful red heart shaped leaves in the fall along the coast making it one of the few trees to "true colors" in that area. Surely this was why it was imported...for it is fall showiness. Now, it has become an invasive weed along the coast from the Louisiana border down past Lake Jackson and inland for a hundred miles or so in places. Cattle ranches fight it. Municipalities spend tax dollars trying to eradicate it. But honey bees and beekeepers love it.

The Honey: Mesquite Honey is slightly floral and pleasantly mild, and is very light in color as it actually happens to be our lightest honey in both flavor and color out of our varietals.

The Provenance: Our Mesquite Honey comes from the Deserts Southwest of the US and Northern Mexico. It needs specific drought conditions in order to produce the nectar for the bees to harvest, so while there are plenty of Mesquite trees around Texas, the weather conditions won't benefit the harvest unless in the most southern regions.

The Honey: Sourwood Honey has a floral and light taste with hints of baking spices and anise. The honey’s color is typically light amber with a slightly gray or brown tint and its texture is defined by a smooth, caramel buttery quality.

The Plants: The Sourwood tree (Oxydendrum A​rboreum) is also called the Lily of the Valley tree or the Appalachian Lily tree, growing 40 to 60 feet tall with a diameter of ​up to ​one foot. The leaves are oblong, pointed at the apex and have a sour taste. Flowers are white​,​ bell-shaped​,​ and hang in clusters 5-6 inches long at the end of the branches.

The Honey: Basswood Honey has a distinctive taste with a mildly spicy and woody bite; its lingering flavor is almost minty. Very light in color.

The Plants: The Basswood tree is a close relative to about thirty species of trees native throughout most of the temperate Northern Hemisphere. In Europe it is more commonly called a Linden tree. I​n North America it is more commonly called Basswood. This deciduous tree can reach 130 feet tall with large heart-shaped leaves 2-8 inches across creating dense foliage and a large shade canopy.